Whether picking up another bag of dog chow or paying the most recent vet bill we’ve all looked at our dogs and joked “time for you to get a job”. Every dog has his or her own special skills. So if you’re thinking it’s time for Fluffy to start pitching in, let’s peruse the canine classifieds.

Police dogs are probably the most commonly seen example of working dogs. Dogs have been employed by the police since at least the Middle Ages. In fact, Scottish bloodhounds

were know as “Slough Dogs” — most likely leading to the term “sleuth” as a reference to a detective. Police dogs, or “K-9’s”, serve a variety of roles including sniffing out bombs and drugs, search and rescue, and of course law-enforcement. Most police dogs are bred for the job, with selection and training starting at just a few weeks of age. The most popular breeds are German Shepherds and the very similar Belgian Malinois. Perhaps one of the most important traits for a police dog is a willingness to obey his handlers commands. At a demonstration last fall I was absolutely blown away by how focused the K-9 was on his handler. He repeatedly chased down the volunteer bad-guy and released instantly on command. So if Fluffy won’t give up her favorite toy without a wrestling match you might want to keep up the job hunt. 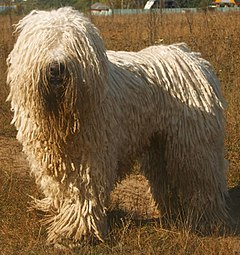 If protecting police isn’t in the cards maybe protecting livestock is up your dog’s ally. Working with livestock is one of their oldest professions. Livestock Guard Dogs tend to live in the fields with the flock. While they have been know to protect charges with deadly force, most often a simple display of aggression is all that’s really needed. In many regions of the world where LGD’s are employed local wolves seem to know them and tend to avoid their flocks in favor of unguarded prey. Of course if your furry one would rather chase fluffy creatures than protect them maybe a job as a herding dog is more suitable. Cattle dogs make a living helping to move cattle around the ranch. They are fast, tenacious, and brave nipping the heels of the cows to get them headed where their ranchers want. But again, ability to follow direction is vital. Ok, so your furry friend is not interested in sporting dreadlocks like the Komondor or dodging hooves like an Australian Shepherd, consider another line of work.

Of course when I joke about putting my furry ones to work, pulling a sled is the first thing that comes to mind. Dog-sledding first evolved in Mongolia around 30,00 years ago. Sled dogs provided transportation and delivery of supplies to snow covered regions otherwise inaccessible. During the Alaska Gold Rush sled teams moved everything from miners to mail during the frozen months. Most notable is the 1925 Nome serum run where a diphtheria outbreak was halted by a grueling 700 mile, 20 dog team relay, to deliver lifesaving serum in just 6 days. The run is still commemorated by the annual Iditarod Sled race. Dogs are still used in very rural parts of the world to move freight, but most people sled for recreation. Think you have to have Husky to sled? Think again! In the late 1980’s John Suter raced a team made up of mostly Standard Poodles. They ran surprisingly well for a few years before race officials banned them from the race.

Alright, still not finding a job suitable for Fluffy? When it comes down to it the most important job that every dog and cat has had since the dawn of domestication is to be our companions, our partners, and our best friends. What job would your dog be great at?